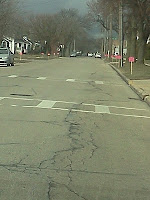 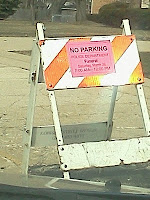 Craig A. Birkholz  He survived two tours in the big sand box just to be lost trying to save a fellow officer in Fond du Lac?  Really?  It is a tragic story.  It is a tale of two soldiers and their stories after returning home.  I have been writing this post in my head for days.  Trying to figure out what to say, what to focus on, how to handle it. It has been on my mind - constantly.  I listened to the feed as it all went down - I was just captured by the surrealism of the whole situation.  My heart broke when the news mentioned his wife.  I am a teacher in Kenosha and the parish that was taking care of the funeral mass is attached to our lower campus.  LITERALLY the signs of this tragic loss were everywhere!  There are pink signs reminding us that there is a police funeral surrounding the entire school and church.  Throughout Kenosha there are signs - at union halls and scrolling at banks.  Kenosha is feeling the loss of one of their own. 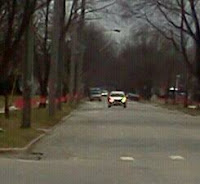 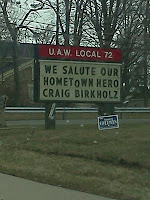 My boys have taken it so much to heart that they wanted to attend.  I thought about trying to make it happen.  But we had a family college graduation and I wanted to be sure there was enough space for those who were closest to him to mourn the loss of a hero.  And...I was not sure if I could handle it, personally.  There are no words, none.  As wives to servicemen, police officers and firefighters - we all know this is a reality of our world.  My husband is at work as we speak and I could be the one getting that call.  But we always put it to the side.  This loss, I have not been able to do that with - I was not even part of his world. But I feel for his wife - they have only been married since 2009.  They had so many plans, the future was waiting for them.  Now, I am certain, her future is moment by moment as she tries to grasp the reality of the whole situation. At the graduation yesterday, there was an MPD officer behind us, his badge was a reminder of the loss.  Craig Birkholz was a hero - at home and in the bigger world.  The world is a better place because of him.  There are no words.  Nothing I can write or say can bring him back.  Nothing I can write or say can take the pain away.  THERE ARE NO WORDS.

War: Through Their Eyes is a multi media project completed by UW-Oshkosh - including a photo exhibit, a series of podcasts and a book, about the experiences of the soldiers, UWO students and alum, in the modern war campaigns.The interviews are conducted by Grace Lim's Spring 2009 Writing for the Media class.  Sgt. Birkholz story is among those stories preserved in this piece.  Please take a moment to take a look at the site.


Please say a prayer for the wife, family, friends and Fond du Lac PD that are all feeling this loss.  May God grant them peace, acceptance and healing through this most difficult and tragic part of their lives.  Please say a prayer for your firefighters as they leave for work, to keep them say.  Most of all I will be saying a prayer of thanks that we have these most brave and honorable men and women, willing to make the ultimate sacrifice to keep us safe - at home, in the community and throughout the world.

Sgt. Craig A. Birkholz - we thank you.  May you rest in peace.

Too Hot to Handle

Taken from "The Fireman's Wife" by Susan Farren

I am thank ful. This has not always been an easy walk for me.

I am disappointed. We have missed family gatherings, weddings, dinner engagements, birthday parties, and holidays because of shift schedules and overtime.

I am patient. There have been dinners spent at the firehouse waiting for Daddy to return from a call while the kids get cranky and the food gets cold.

I am nervous. I awake at 3:00 A.M. hearing creaks in the house and don't have the comfort of my husband beside me.

I am tired. The house is full of sick kids and there is no relief in site because Daddy is on a seventy-two-hour shift.

I am jealous. Jealous of all the women whose husbands came home at 5:00 P.M. to have dinner and hold them at the end of their day.

I am worried. I worry that he may not come home one day. This I try to tuck away.

I am content. We have decided to give up my career so I can stay home and raise our children. We no longer have an abundance of money or things. It is the greatest freedom I have ever known.

I am incompetent.There was a time when I considered myself moderately intelligent. I now struggle to remember where I left my car keys, the diaper bag, and, occasionally, the baby.

I am waiting. Knowing the phone may one day ring for me.

I am doubting. Doubting that God hears all my prayers. Doubting I am the kind of wife and mother He needs me to be.

I am trusting. Trusting that my husband will come home again.

I am confident, I am embarrassed, I am lonely, I am surprised, I am overworked, I am underpaid.